Tailwheel rating: not as easy as it sounds!

As I said a few weeks ago, I was planning on doing a tailwheel rating with Adrian over at the British Aerobatic Academy (@BritAeroAcademy). Well, since then, I have completed the rating on his Extra 200, G-EEEK, and what fun it was!

As you can imagine, it was all a bit of a steep learning curve: a new aircraft type, that has the added "complication" of a 'wobbly' or variable pitch prop, as well as being a taildragger with a bit of power!
The thing with a taildragger, you see, if that they are very lively aircraft on the ground. Mis-handled, they will come back to bite an unsuspecting pilot. As I was keen not to let this happen, I thought I best pay attention to what I was doing!

First up was the task of getting into, and strapping into, the Extra - no easy feat, as Chris over at @studentpilotblog will attest! Once in, however, the real work begins. First up: starting the aircraft which, at first, seems a world away from the C152, but you soon get used to it! (It also starts first time, unlike the C152s and PA28s I am accustomed to!).

Once you come to taxi the aircraft, you realise why tailwheel pilots aren't to be sniffed at - it takes some getting used to, thanks to the very restricted forward view. You have to taxi the aircraft is a constant weave to check the area in front of the nose is clear, and so as you can see where you are going. Whilst you are doing this, you are being careful not to let the aircraft run away from you - something you could do - and probably get away with - in a Cessna!

Anyway, after the power and pre take off checks, which are not dissimilar to a Cessna or other aircraft, apart from the exercising of the propellor to check everything works and to get oil around it, it is time to leave terra firma.

The take off itself is a non-event after you are used to it, but takes a bit of getting used to. You have to steer the aircraft very actively to keep the aircraft straight, raise the tail by pushing forward on the stick, carry in steering the aircraft carefully and very shortly, the aircraft will fly itself off of the floor.

In the air, the aircraft behaves like any other aircraft, like you would expect. Once you want to come down, however, the fun really begins! Landing a taildragger is unlike anything I've ever done - a massive, massive, learning curve.

You approach the runway in a manner rarely used in a Cessna, apart from in a crosswind or other event - a slide slip, the purpose of which is to allow you to see over the nose of the aircraft. Once you have flown down the approach to the required height, you begin the round out and hold off - bringing the aircraft back to the attitude you need to land in a smooth, three point, attitude. You then sit there, holding off and controlling the aircraft very smoothly until you hear the gentle "thud" for the wheels hitting the deck. Once down, you control the aircraft with your feet until it has stopped - the biggest danger being the aircraft cocking into wind (or ground looping) at slow speed. That could *really* ruin your day.

Anyhow, after two days of superb instruction off Adrian - and much tea drinking in between - I achieved my tailwheel rating and complex sign off. I'd recommend the rating, and indeed the British Aerobatic Academy, to anyone. It really helps you sharpen your skills and become a "proper" pilot.


PS - a quick thank you to Lauren aka @groovy_nut, Chris aka @chrisJB94 and of course Adrian - @BritAeroAcademy! 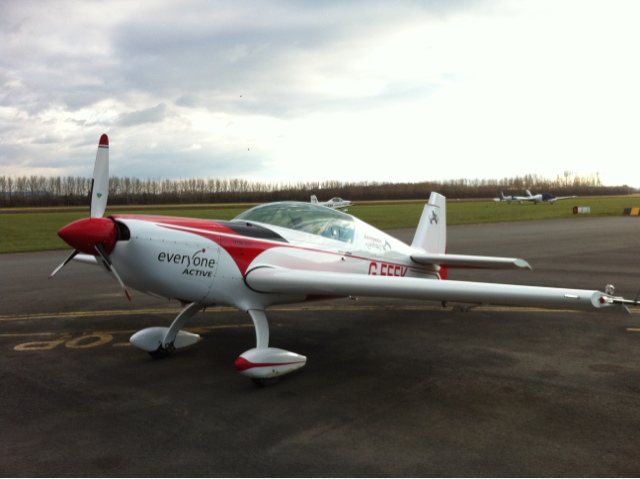